Cobra Defense:
Basic Awareness in Traffic
○ Always leave enough room between you and the car in front of you so you can turn and drive off in an emergency. This will prevent you from being boxed in.
○ Avoid pulling up window-to-window, which can promote harassment/road rage.
○ Avoid settling scores or showing people who’s the boss by tailgating, brake checking, etc. These immature and egotistical gestures can lead to serious violence – whether you were in the right or not.
○ Avoid distractions such as texting while driving; not only is it dangerous, but you lose all situational awareness.
○ Understand your state statutes as they relate to carjacking or even someone reaching into your vehicle with the intent to do you harm. For example: In the state of Florida your vehicle is equivalent to your house. It is called “castle doctrine.” If you were to reach into a car, even to push someone, they could shoot you dead.
○ Practice the motions of any weapons you have. Example: if you carry a gun in your car, practice getting it out, unholstering it, and knowing if it’s on or off safety. (Conduct this drill safely with the weapon unloaded!)
○ Consider tinting windows to provide occupied/unoccupied security. If someone has a hard time seeing in it leaves them to assume how many people are in the vehicle because they can’t actually see.
○ Avoid the temptation to get out of your car if someone else does. If you get out, you lose your tactical advantage. Staying in the vehicle gives you:
● Locked cover from strikes and aggression.
● The ability to escape and/or use your vehicle as a weapon.
● The ability to access weapons you may have.

These types of scenarios are case by case and actions will dictate outcomes.
○ If you are pulled over by an officer in an unmarked car, check for “red and blue” lights. Orange, white, or white and yellow lights combined with an individual who is not in an official uniform may indicate a con or predator.
This is a touchy situation, however, listen to your gut. It’s very apparent when a legitimate officer pulls you over.
○ If you are being tailgated, threatened, or you just feel uneasy about a vehicle following you, don’t speed up or “try to lose them”. Find a crowded plaza or store front to pull into and let them go by. By doing this you surround yourself with witnesses which makes a would-be road-rager think twice. Keep in mind that you will most likely never see that person again, so take your ego and pride out of it.
Copyright © 2011 COBRA Defense Systems
http://www.cobrafortcollins.com
http://thedojofc.com 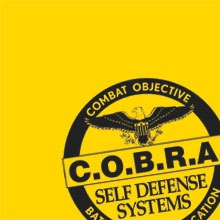 Sign up today and get free access to any of our other classes until your C.O.B.R.A.™ Academy starts. PLUS get a free C.O.B.R.A.™ T-Shirt!